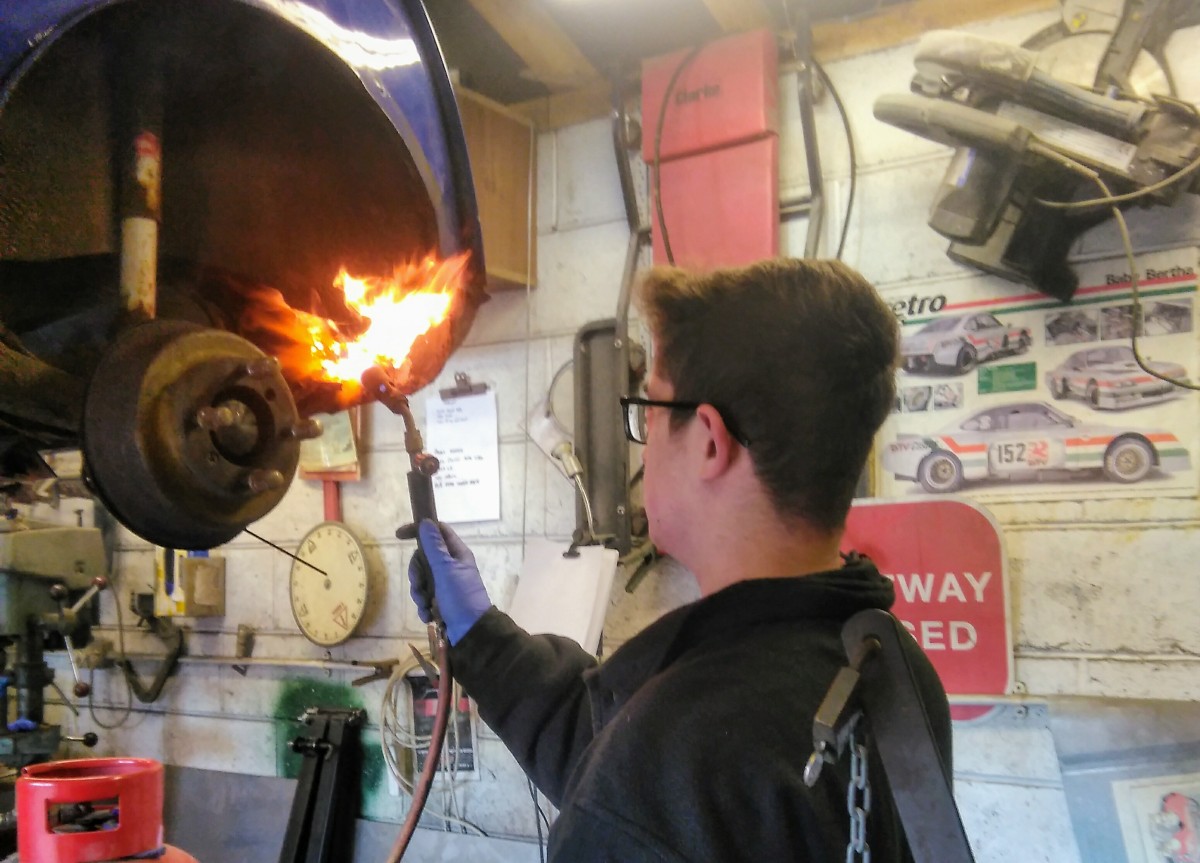 Work removing the bulkhead ‘furniture’ is nearly complete. This took more time than anticipated due to rusty and butchered fixings. Some bolts were so mauled that they had to be cut off and the ones that were rusty snapped. Approximately a 50% attrition rate.

Moving on to the back of the car, a quick assessment showed (expected) rust. The rust was more than you would see on a ‘modern’ 1996 car but the Mini was designed in the 50’s.

The designers were too busy jiving and smoking pipes to worry about rust traps. 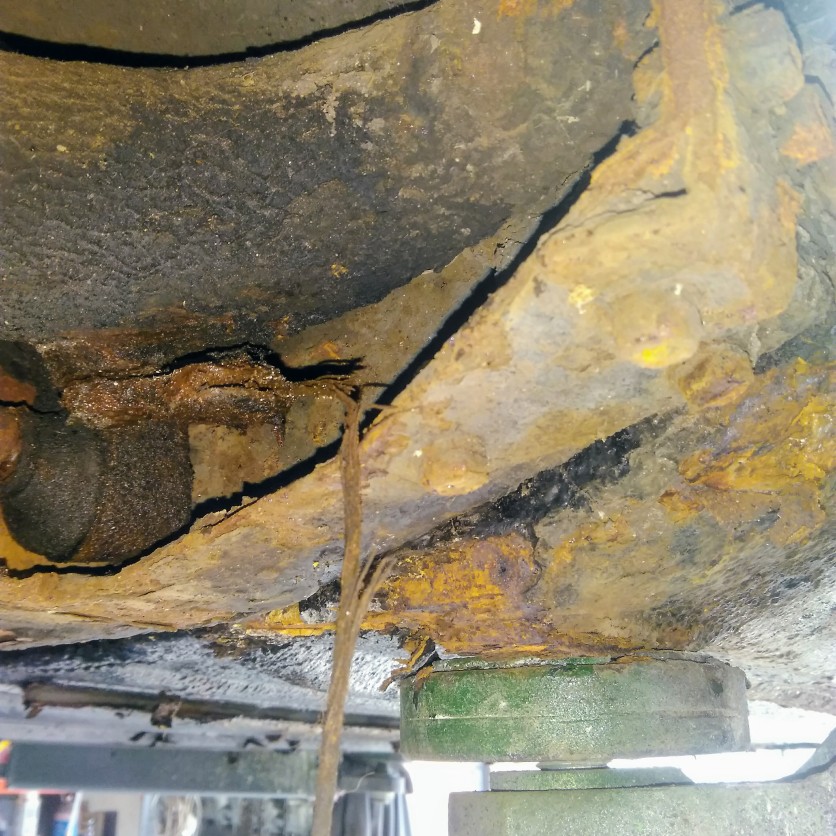 Luckily replacement panels are available for every part of the Mini. Such luxury…

I have just assembled a car rotisserie so over head welding should be kept to a minimum. Hooray! 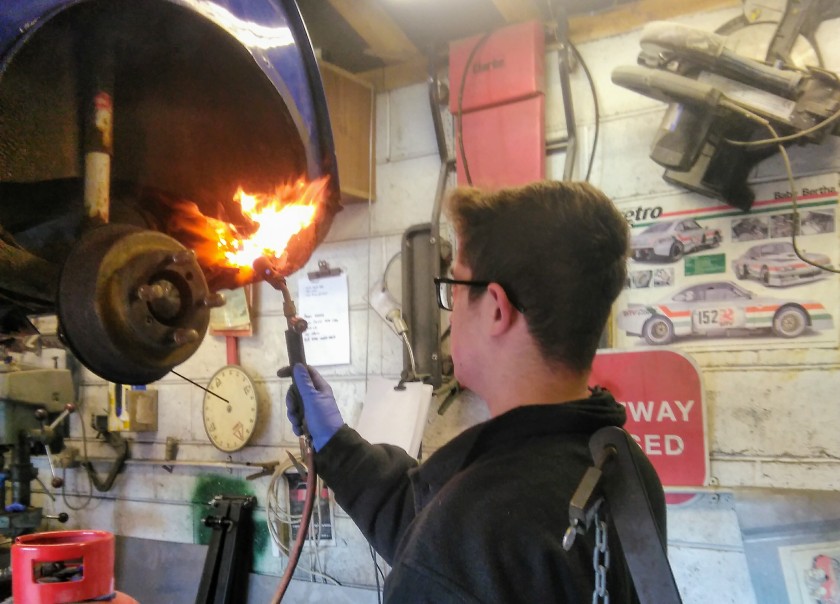 Ok, Joe is heating up the subframe mounts to make them easier to undo. The subframe was then lowered to the floor. It needs work as it is pretty corroded. As these are so inexpensive it is more cost effective to write this subframe off and buy new. 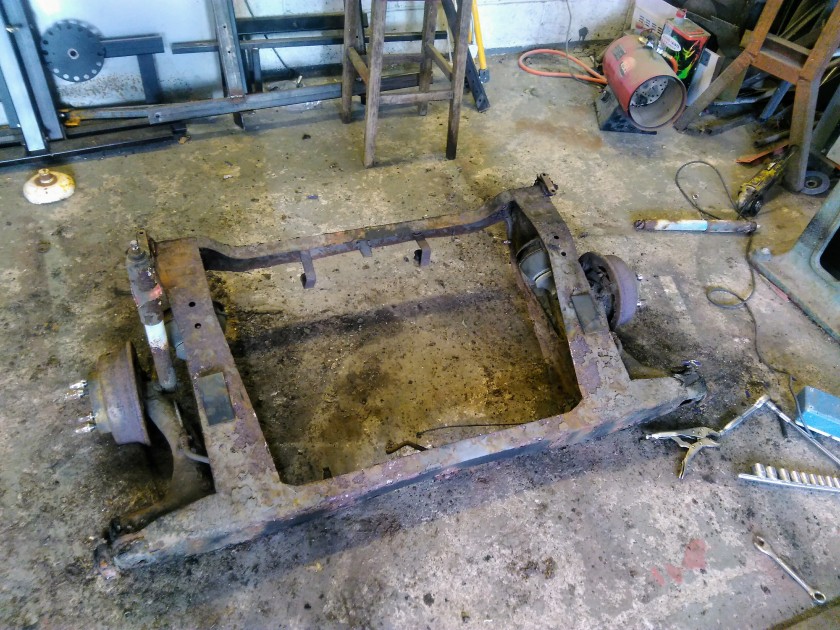 There is a big hole were the subframe used to be.

Next week we will hopefully have the car mounted on the rotisserie.

I’ve been looking forward to working on this ’96 MINI for a while. The car , unbelievably, came with an MOT. 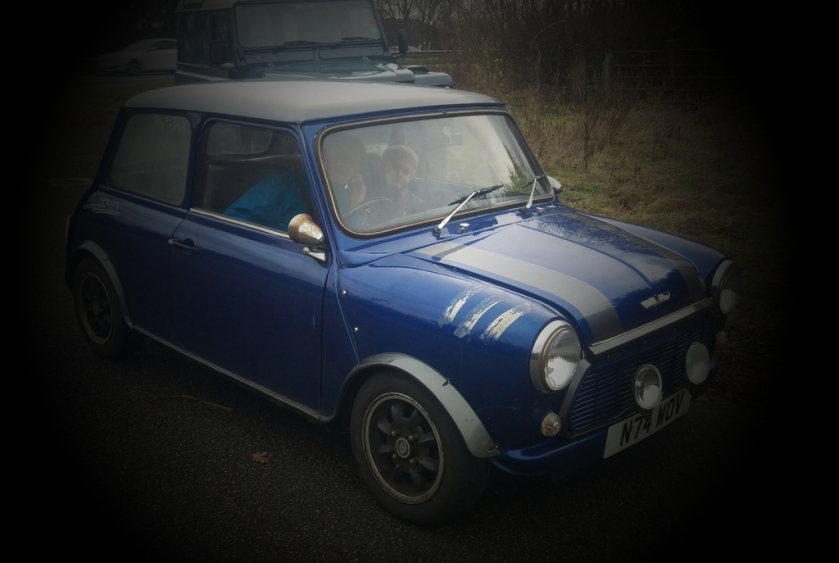 By the time I got my hands on it the owner had started the strip down. The fibre glass front had been removed along with the dash and most of the interior.

The Mini was loaded onto a trailer…

…and into the workshop. 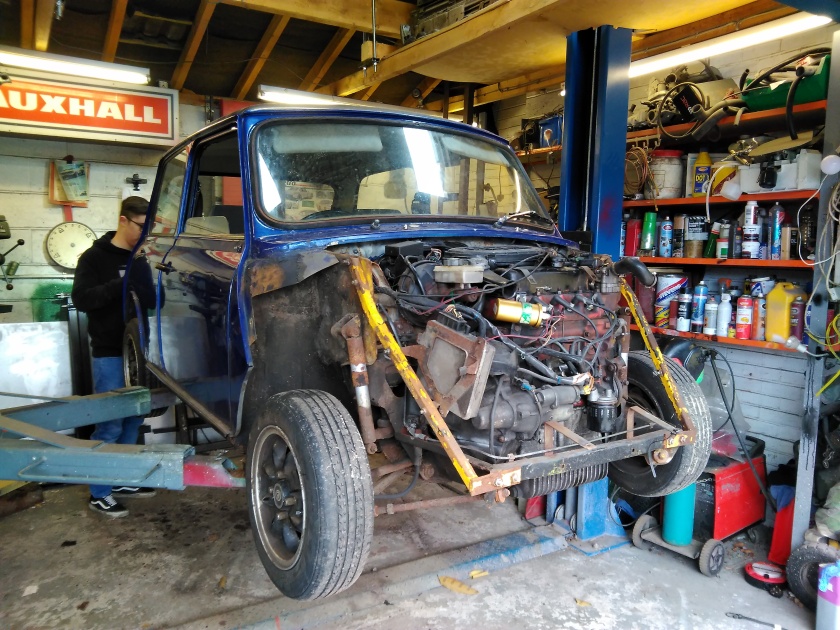 My son Joe will be helping with the build as well as taking (the better) photos.

I started the strip down by disconnecting everything from the engine and gearbox. Because the Mini is front wheel drive and fuel injection this was a time consuming job. 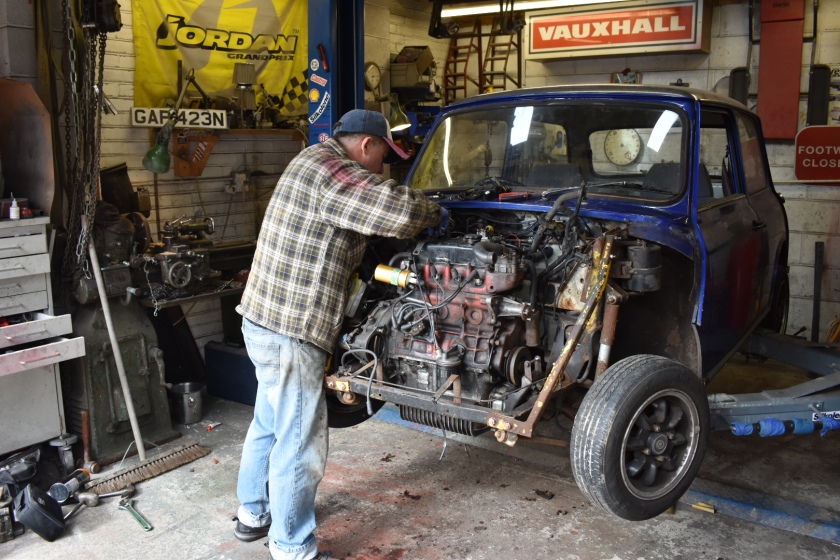 Photos were taken as we went along to help with reassembly

After everything was disconnected the engine and gearbox unit was removed. 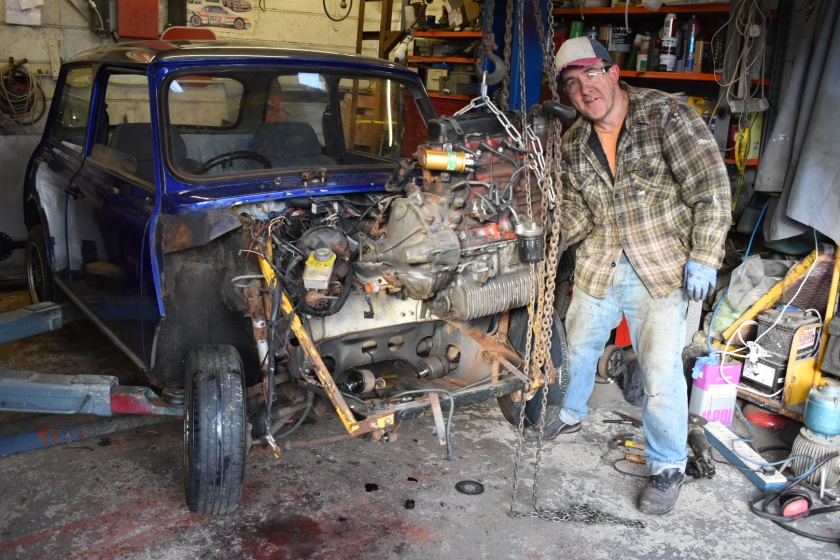 The next day was spent removing the front subframe. This will be stripped down, checked over and sent to powder coating.

I am happy with the progress made so far. next will be removing the wiring harness, clearing the bulkhead and removing the rear subframe.

This is as far as I go with this project. The owner, who is a paint sprayer, wanted the structure of the car solid. he will be finishing the rest of the Astra himself. I will post up any progress he makes here.

This leaves space in my garage for a new project…

Pretty crusty… I had to cut off the outer arch to repair the inner. The outer was then welded back on. 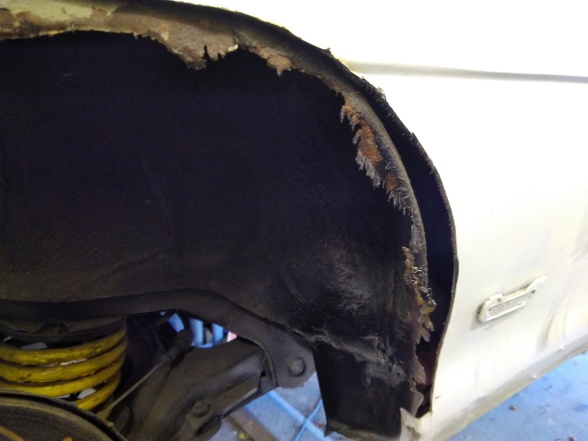 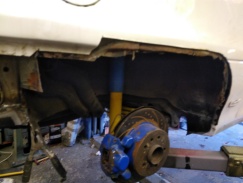 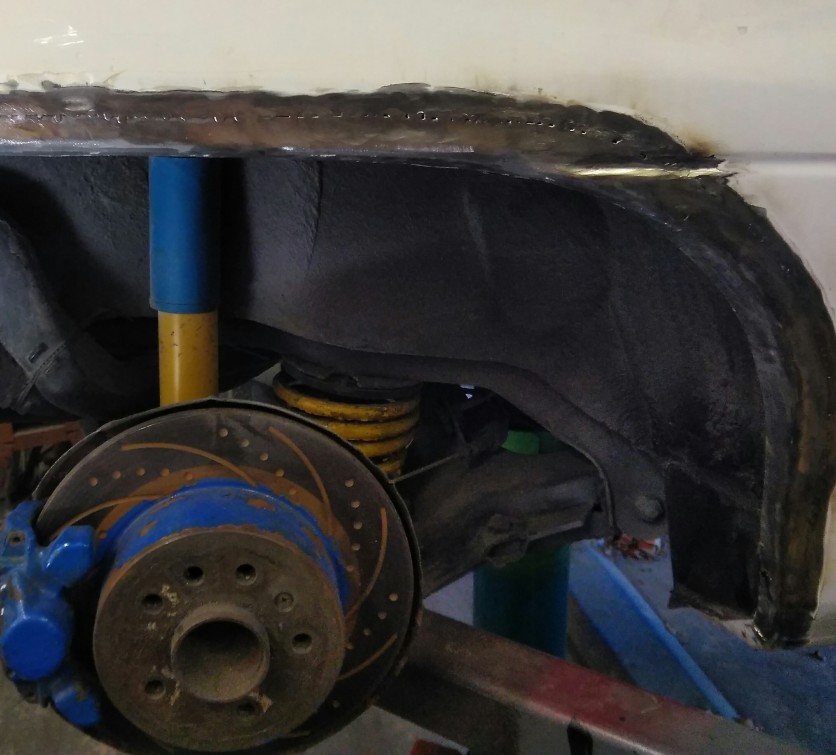 These areas behind the rear bumper had lots of hidden rust. The owner managed to obtain an outer skin for the N/S …

…But he could not get one for the N/S so a patch panel had to be fabricated. Not too stressful as the finished panel will sit behind the bumper. 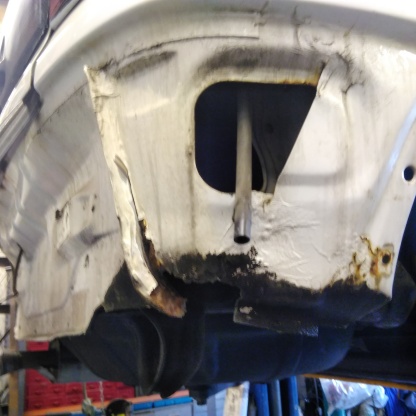 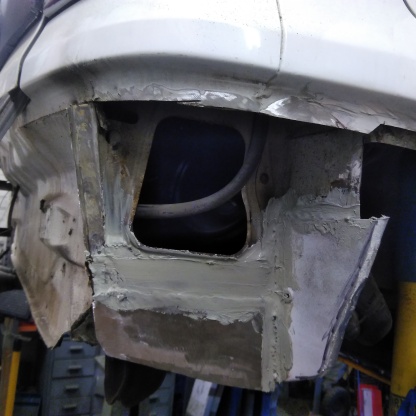 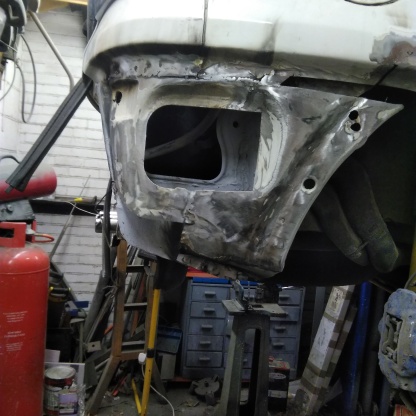 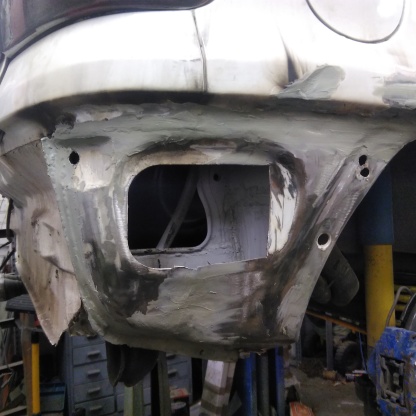 The rot was cut out, painted, repaired with new metal and coated to stop further corrosion 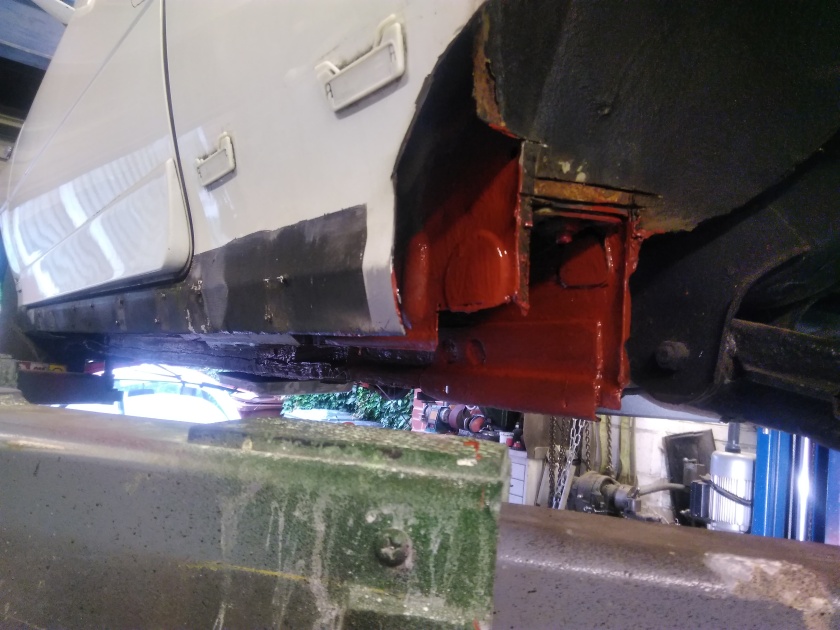 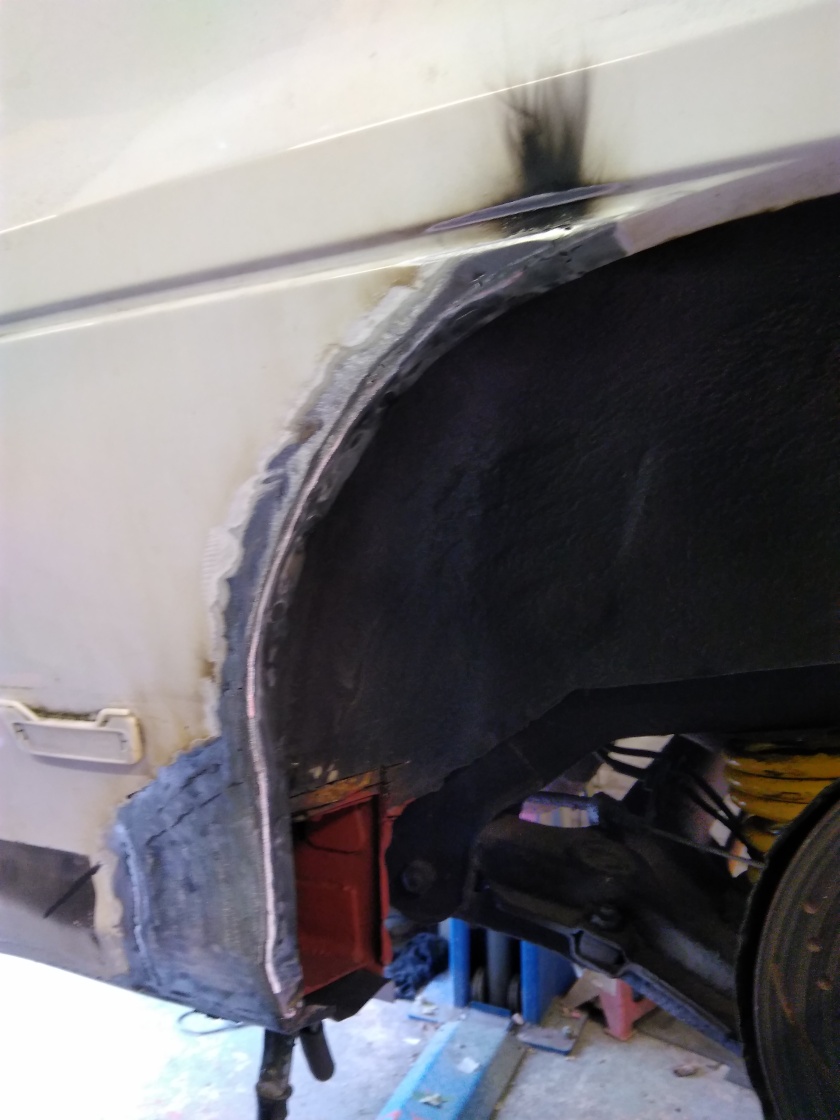 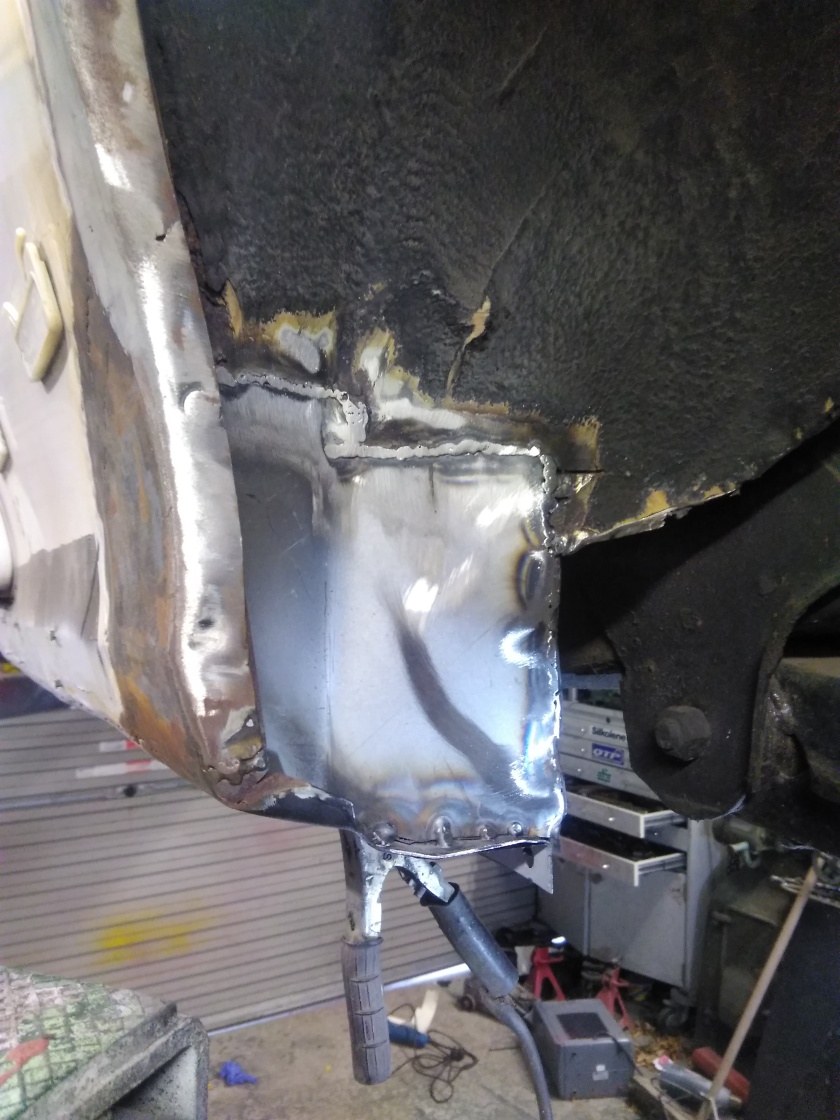 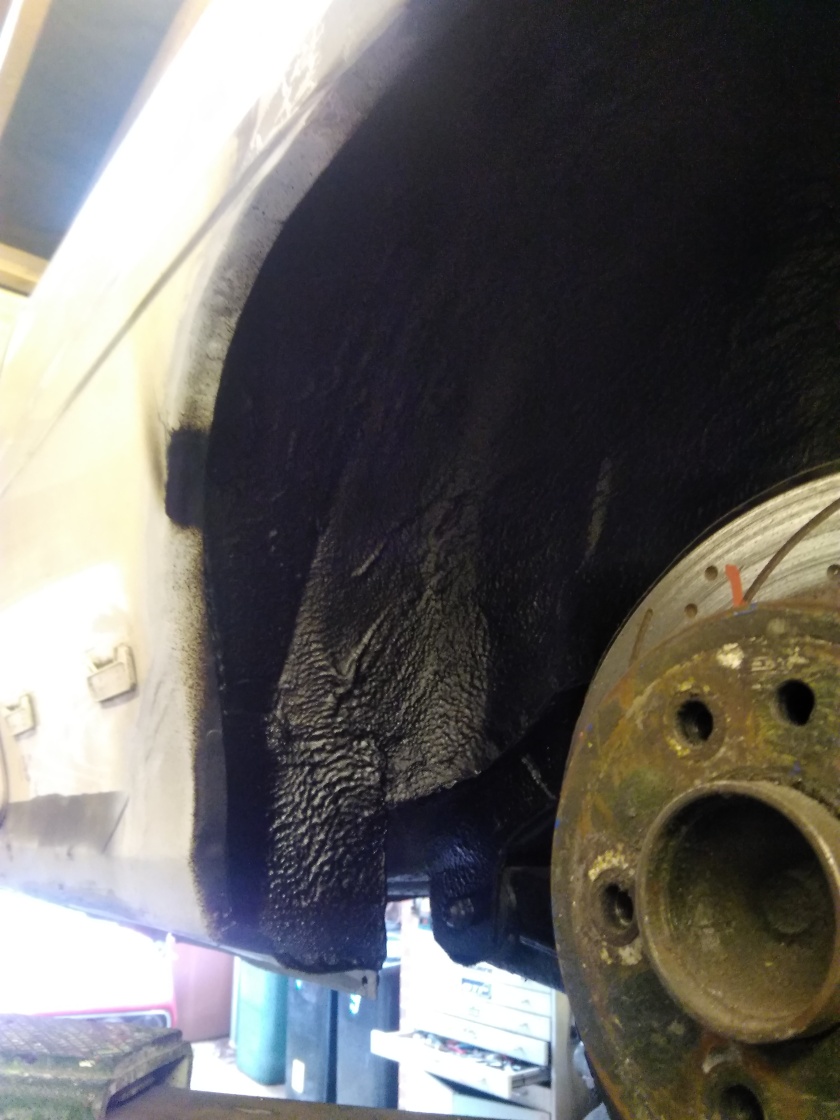 A few weeks  work ahead on this early ’90s Astra GSi. The Owner has had it for a good few years and wants it back on the road for sentimental reasons.

As with most modern classics, they hide their corrosion very well. Its only when you dig around underneath that you find problems like this sill

Rust chopped out and new metal welded in. The inner sill was then rust treated and anti corrosion paint was applied.

The new sill was then welded in place….

…and closure panels made and fitted.

On to the other side and more of the same. 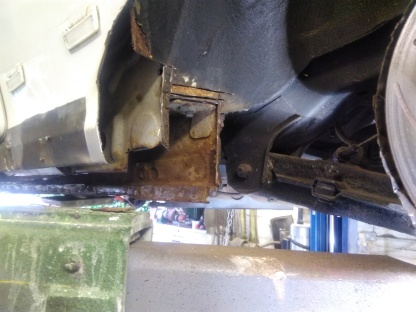 Finally! After refitting the whole car, including a new interior, it was time for a polish and fresh MOT. 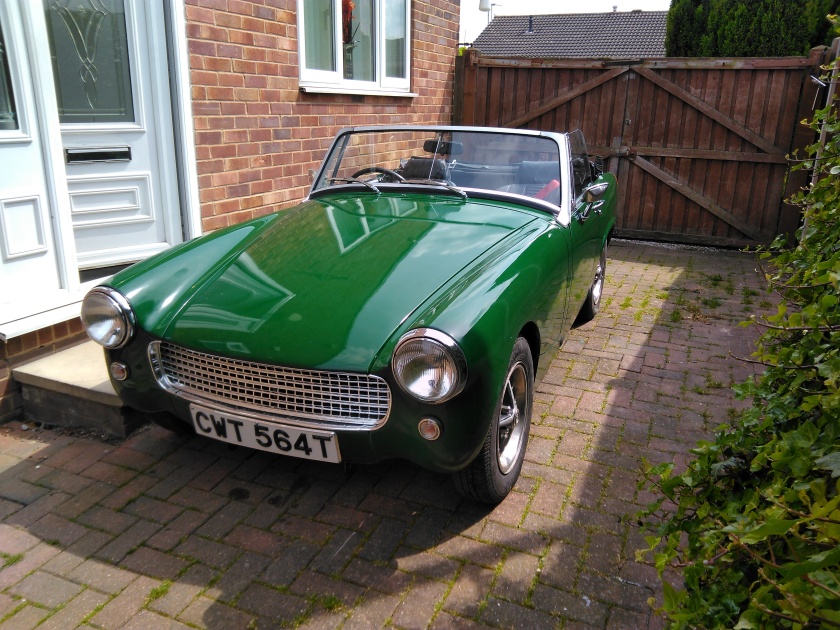 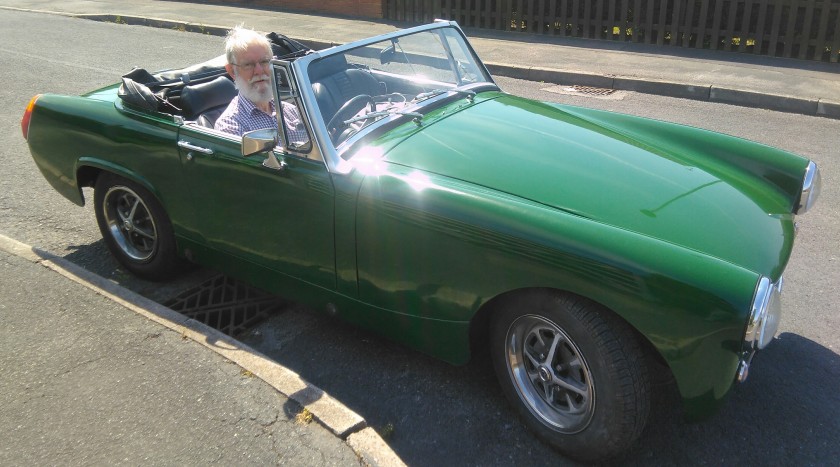 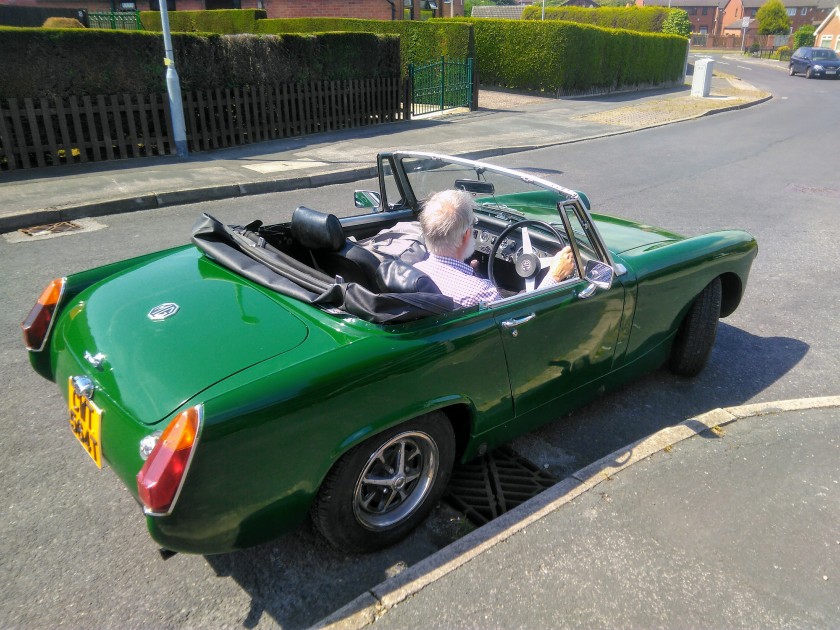 The car was handed over to its happy owner who intends to use it regularly.

So the top coat was given a week to harden then the work began. The whole car was rubbed down by hand with 2000 wet and dry paper and machine buffed to a shine using Farecela G3. This was very time consuming, arm aching and boring work. I usually put some music on and let my mind wander…

As you can see assembly has begun with the engine and gearbox being fitted as one unit. A new 3 piece clutch and slave cylinder were also fitted.

A job that makes a massive difference to the overall look of the car is fitting the grill and lights which were done today. 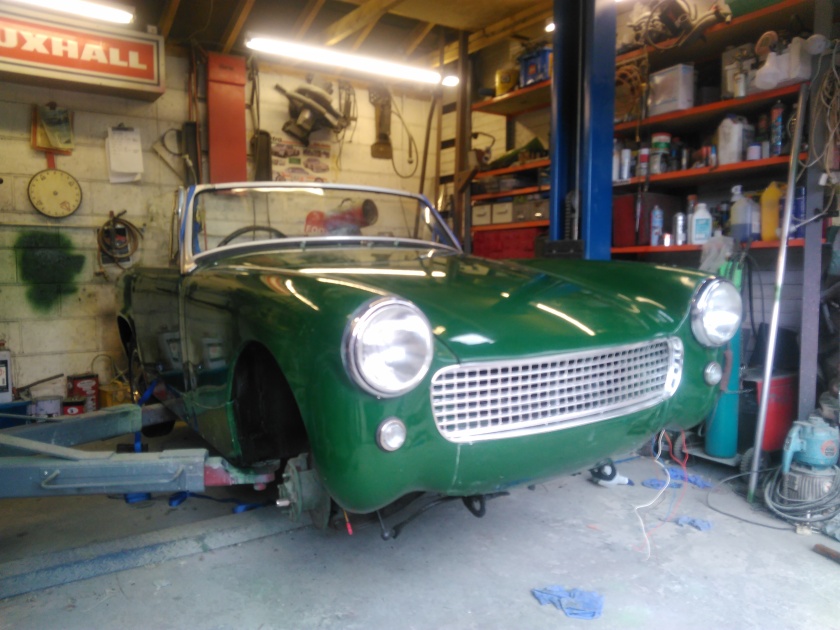 I am struggling to get the windscreen to body seal to fit properly so this is now held under compression with a couple of ratchet straps with the desperate idea this may help.

I have started on the interior and have half fitted the carpets. This job is next on the list to complete. Once the doors are built up I will be able to fit the door cards and seats. The interior will then be finished. 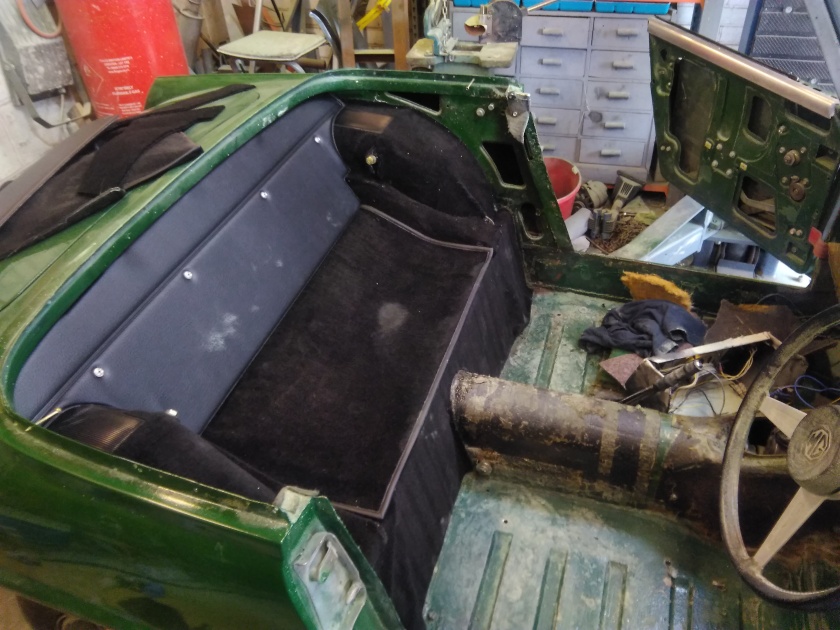 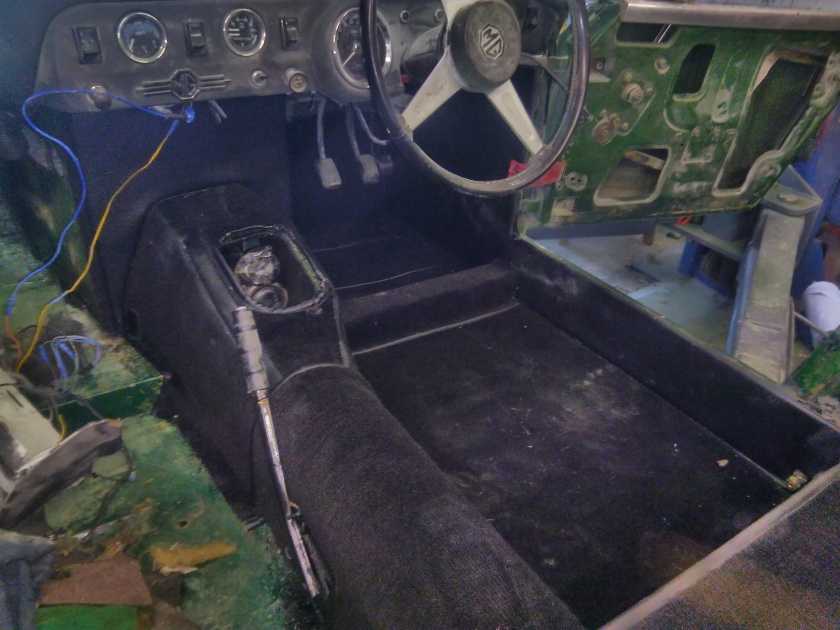 The engine should be up and running next weekend so this is something to look forward to.

If no problems occur the car should be ready in around 3 weeks.

So the primer was flatted back and the low spots filled and rubbed level.

Several more coats of epoxy primer were then added and  the process repeated.

After this was flatted it was finally time to start thinking about the top coat. The Midget will be painted in the original colour of Brooklands Green.

First off the door shuts, edges and gaps were painted with a small spray gun.

After this I sprayed 4 coats of top coat over the whole car. 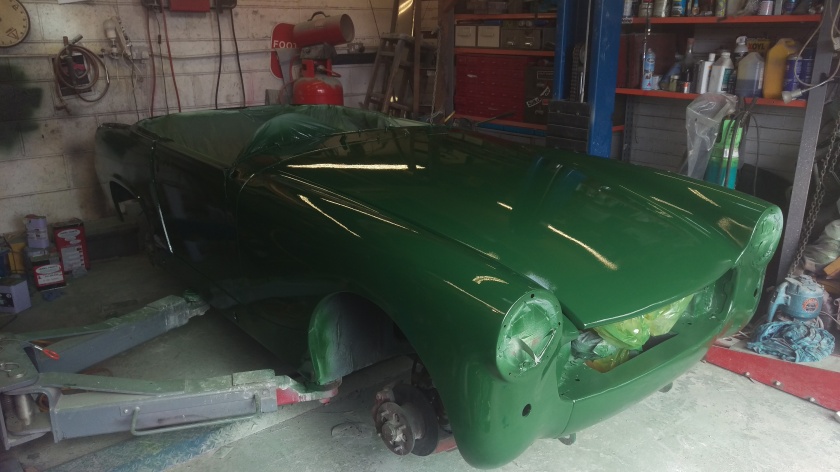 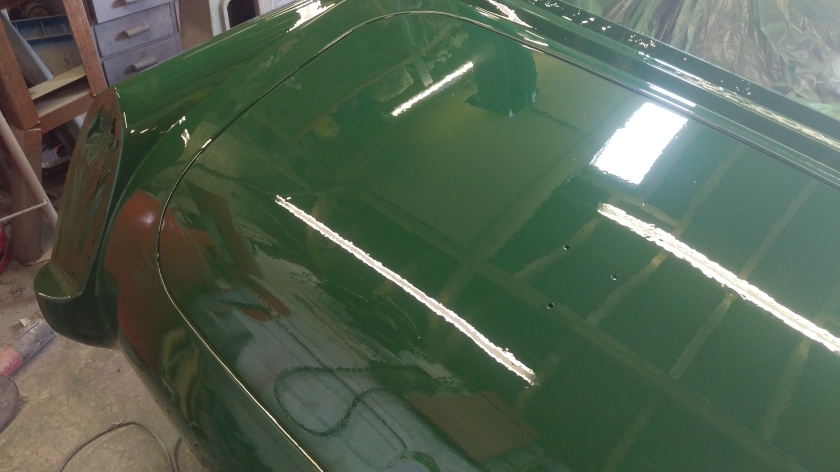 The finish is not perfect with a small amount of orange peel and the odd bit of dust which I expected. These will flat out before the final polish after time has been given for the lacquer to harden fully.

I am pleased with the result as you can see my shadow giving the thumbs up below.